‘Svayam Accessibility Awards 2018’ ceremony was held on 14 November 2018 at Taipei, Taiwan on the sidelines of 15th International Conference on Mobility & Transportation for the Elderly and Disabled Persons (TRANSED Conference, 2018). The Awards were conferred by Ms. Sminu Jindal, Founder, Svayam, during the official Gala Dinner ceremony of TRANSED 2018. 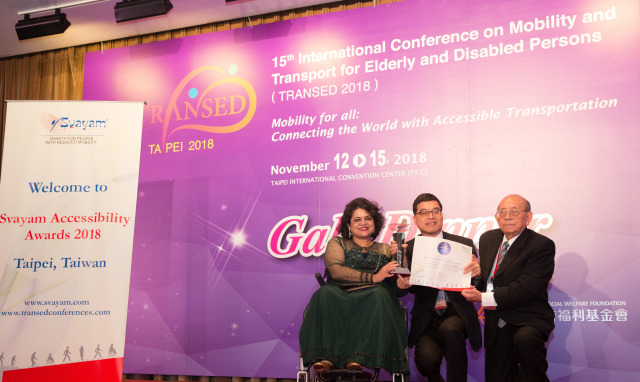 IOT helped towards facilitating the “sustainable development of policies for accessible public transportation to establish an inclusive environment.” 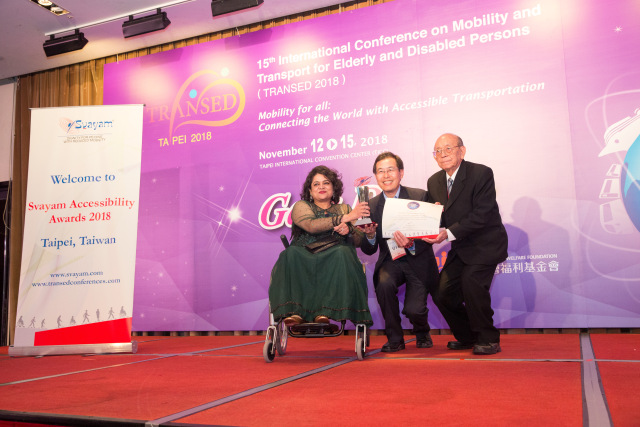 The Bureau of Transportation, Taichung City Government has undertaken inclusion- friendly accessible transport initiatives such as “Adopting Connected Vehicle Technology to Improve Bus Service” and “Accessibility for Blind and Visually Impaired Passengers”. The Bureau’s ‘City All-in-One Service’ is a ‘visually impaired navigation technology’ combined with public transport applications’ services, which is truly a great enabler. The system also works for inclusion as general population and visually impaired passengers can use the bus service together without any barrier.

In order to a create disabled- friendly environment, the North Coast & Guanyinshan National Scenic Area Administration, Tourism Bureau, MOTC, Taiwan, has included accessibility as one of its main focus areas toward “Building a Barrier-Free and Accessible Environment at the Keelung Heping Island Park” and North Cost Accessibility Route”, and allocated a dedicated budget to develop accessible facilities.

North Coast offers nursery room, accessible toilet and accessible parking lot, accessible route, while also offering wheelchairs and baby stroller on rent. As North Coast owns one of the most unique geomorphic and incredible beaches in the world, it made the entire facilities accessible so that tourists with disabilities can also enjoy cruise tourism.

The Bureau of Transportation, Tainan City Government’s “Bus Rapid Transit” system helps in creating a barrier-free environment of bus service. There are 149 low-floor buses now in Tainan with wheelchair zones, specific seats for guide dogs, and companion seats. In addition to 40% low-floor buses ratio, there are 607 new type bus shelters which have been built with LED dynamic information display systems, and 62 of them were selected to be equipped with “blind information dots” and “bus to the station voice broadcast” equipment. 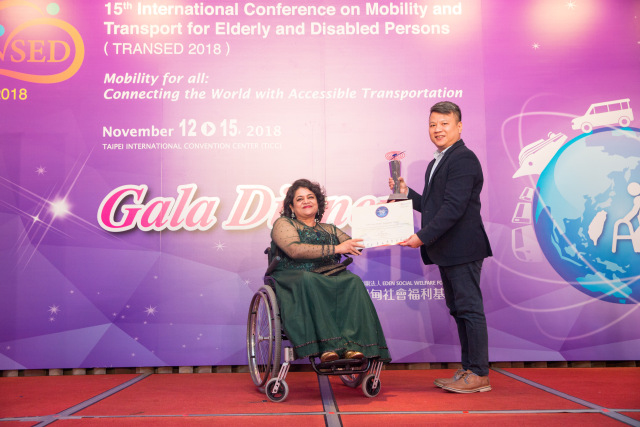 Eden has 100 service centres in Taiwan and overseas and serves nearly 20,000 people every year. Through a series of activities, such as “Love without Borders – Assistive Devices Donation Project”, Eden has succesfully been promoting the cause of disabilities and accessibility in Taiwan and beyond. 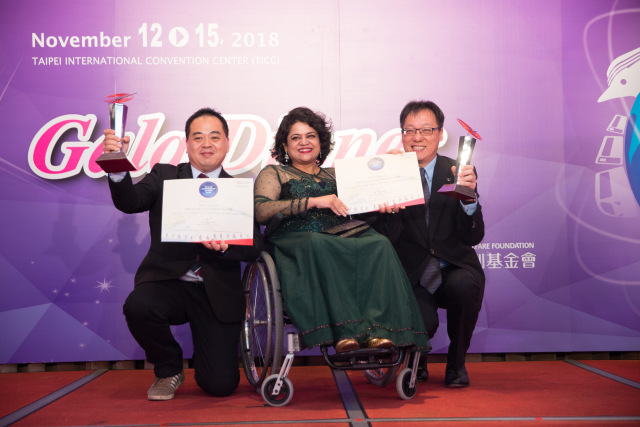 The Yulon Group and the OurCityLove Social Enterprise have together redefined access to hotels with its inspiring accessible transport (Taxi service).

Their cooperation inspires social innovation and boosts accessible tourism services in Taiwan. “Luxgen V7 Eco‐Hyper” is the result of their joint design with the inputs from the people with disabilities, and is Taiwan’s first accessible vehicle.

With these breakthrough models, they have successfully tried to address a common frustration among the elderly and people with disabilities and their families — travelling far tourism. 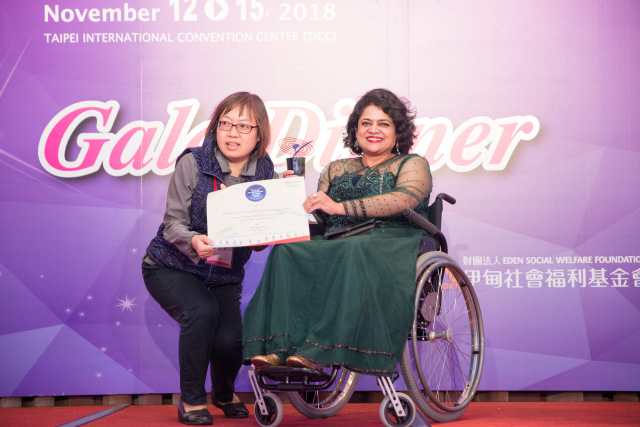 Children Are Us Social Welfare Foundation (CAREUS) has constructed a safe working environment for children with intellectual disabilities and has demonstrated the Best Practice in their Rehabilitation. With assistance of social workers and industrial mentors, they teach children with ID professional skills, and have simplified the operational procedures through individualized and differentiated practical training and the design of assistive devices.

Children with ID are engaged in job matching and license acquisition to transform them from “service receivers” into “service providers.” Also, positive values are also being instilled into them for equal participation in the society.


Svayam Accessibility Awards were instituted on 25 October 2010 to promote and recognize the concept of Accessibility & Universal Design in all spheres of our lives to make way for livable communities - in both rural & urban scapes. The awards are conferred on the organizations in the TRANSED hosting nation, that have shown consistent commitment towards providing accessible infrastructure for all. These awards play a pivotal role in providing the right impetus to the development of inclusive infrastructure, related policies & practices so that such initiatives are sustainable and meaningful.

Svayam Accessibility Awards 2015 ceremony were held on 30 July 2015 at Lisbon, Portugal on the sidelines of 14th International Conference on Mobility & Transportation for the Elderly and Disabled Persons (TRANSED Conference, 2015). The Awards were given away by Ms. Sminu Jindal, Founder - Svayam during the official Gala Dinner ceremony of TRANSED 2015.


Best Practice by a Municipality for their Project 'Accessible Itinerary System (SIA)'. The award was received by Arch. Ms. Lia Ferreira, Ombudswoman of Porto Municipality.


Porto City Hall, through its Municipal Ombudsman for Citizens with Disabilities, successfully implemented this 'Best Practice' project titled 'Accessible Itineraries System (SIA) Porto' - portal that comes to help all the citizens, specially the ones with reduced mobility, optimizing itineraries that meet their needs.

The project maps the city, identifies the barriers to seamless & accessible mobility on city routes and addresses them with active citizen's participation. In short, the project allows online consultation of optimized routes for accessibility (through map consultation), digitally calculated between two previously chosen points giving information not only about paths but also intermodal transportation connectivity, accessibility of important public buildings & spaces. 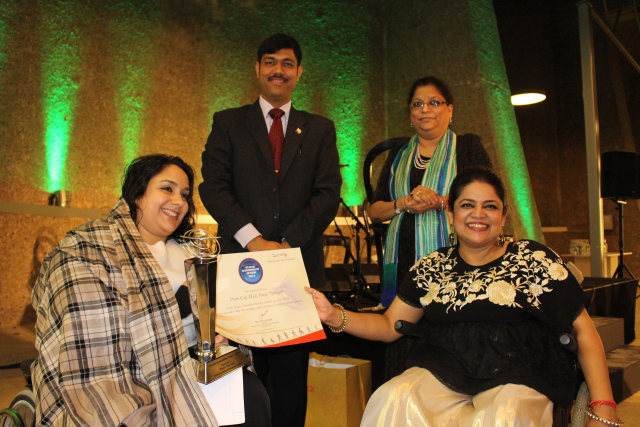 
Municipality of Lisbon implemented the 'Best Practice' Project - titled 'Pedestrian Accessibility Plan' after its approval by the City's Assembly, in February 2014, and is expected to be completed in 2017. The project follows a participatory approach throughout the Plan's implementation, in the development and dissemination of data and tools, definition of priorities, and uptake of guidelines and solutions.

A key goal for the Plan is to change the way the City administration works. Therefore, while the majority of plan's actions are being executed by several city departments, a special task force 'The Pedestrian Accessibility Plan Team' has been formed which is responsible for coordination, monitoring, technical support and a few very specialized actions. Mr. Pedro Homem de Gouveia, Architect is coordinator of Pedestrian Accessibility Plan Team.

The Plan has three overarching goals:


Instead of budgeting & addressing all infrastructural barriers in one go, the Plan defines an effort rate. Every year the City will invest 3% of public works budget in the adaptation of public spaces (e.g. sidewalks, crosswalks, bus stops, etc.) and public buildings (elementary schools, museums and libraries, public markets, etc.). And it hopes to address most barriers by 2017 as per the current plan.

Community participation is considered as a key. A high value is put on the collection of quantitative and qualitative data on the needs, difficulties and preferences of persons with disabilities and the elderly population. This project creates a safe, accessible and free of obstacles route for all pedestrians. 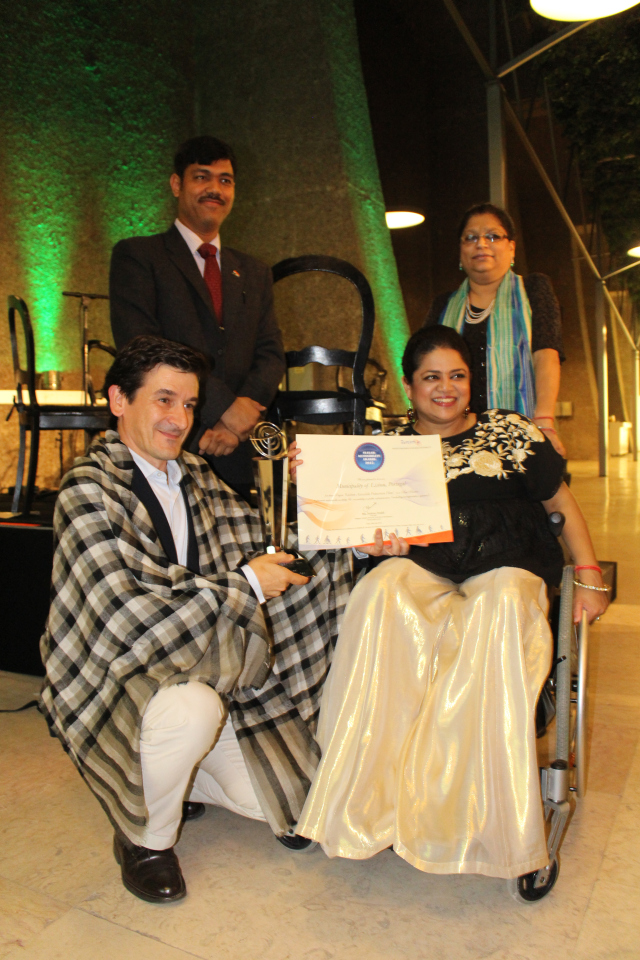 
Best Practice by an NGO for promoting inclusive tourism through their website. The award was being received by Mr. Salvador Mendes de Almeida, the Founder of Association Salvador.


Association Salvador is a nonprofit organization founded in 2003 by Salvador Mendes de Almeida that is dedicated to social integration and improving the quality of life of people with reduced mobility (especially those in wheelchairs).

The website portugalaccessivel.com is today a national reference guide in providing information about the physical accessibility in different types of spaces in Portugal, also proposing accessible itineraries and enabling interaction and exchange of experiences between community of people with motor disabilities.

It counts with almost 5000 audited spaces. At the same time, it is a tool to raise awareness among public and private entities to promote the importance of accessibility. In addition to the website, the Association has also created a mobile application available for iOS, Android and Windows Phones. 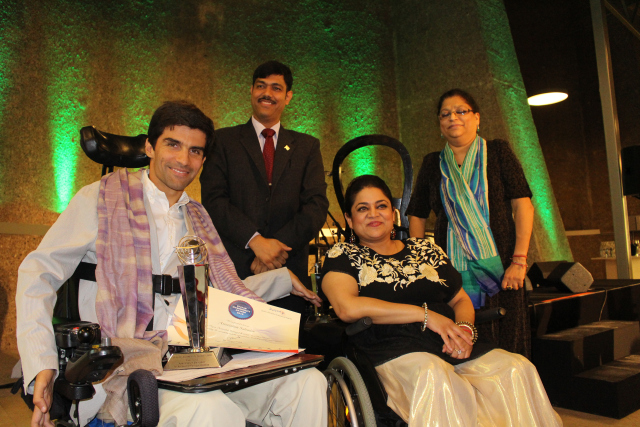 
The First ever "Svayam Accessibility Awards" were held on the sidelines of 13th International Conference on Mobility and Transport for Elderly and Disabled Persons (TRANSED 2012 Conference) that took place at New Delhi during 17-20 September 2012.

The Awards were given away on 19th September by Mr. Arvinder Singh, Hon'ble Minister of Urban Development, Government of NCT of Delhi, the Chief Guest for the occasion.


Delhi Transport Corporation (DTC) received the award for introduction of Low floor accessible buses - both ac and non-ac models and for a sensitized fleet of drivers and conductors. The award was received by Sh. R.K. Kasana, Chief General Manager, DTC . 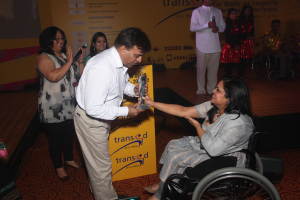 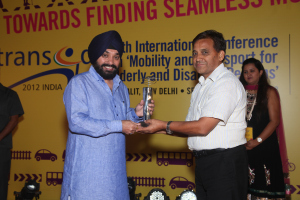 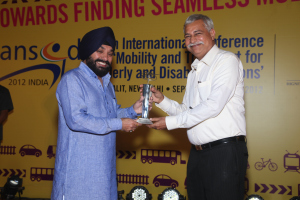 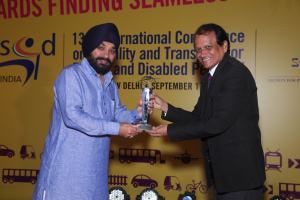 
Svayam Accessibility Awards were instituted on 25 October 2010 to promote and recognize the concept of Accessibility & Universal Design in all spheres of our lives to make way for livable communities - in both rural & urban scapes. The awards are conferred on the organizations in the TRANSED hosting nation, that have shown consistent commitment towards providing accessible infrastructure and services for all. These awards play a pivotal role in providing the right impetus to the development of inclusive infrastructure, related policies & practices so that such initiatives are sustainable and meaningful.


Over 600 attendees from 46 countries from across the world representing all aspects of the infrastructure and transportation value chain joined the TRANSED 2012 conference which was hosted by Svayam, in partnership with the Ministry of Urban Development, Govt. of India, Ministry of Tourism, Govt. of India & Ministry of Transport, Govt. of NCT of Delhi and was co-sponsored by Transportation Research Board of USA. Canadian Transportation Agency also came up in a big way as one of the supporting organizations to the conference. Around 240 papers and 40 posters from 32 countries were presented during three-day long deliberations during 17-20 September 2012.